The Natchez Trace is fast approaching and the Model A engine is still sitting on the floor of the kitchen. To tell you the mood around the house these days, Sherry told me today, and I quote, "Quit messing around with all these other projects and get to work on the Model A. We only have a month before we do the Trace." My response, and I think I better paraphrase this, was that I would be up the night before getting the engine in. It will all come together I'm sure.

The internet is a remarkable monster which can grab you by the throat and force you to waste hour after hour learning about really neat things. Did you know that Judge Roy Bean's first name was Phantley - Phantley Roy Bean? No wonder he was such a mean man. Anyway, I have a new favorite Facebook site called Traces of Texas. It is run by a photographer that has a studio on 5th street in Austin. Friends of the page send in pictures that they have of Texas and Texans. There are some really great pictures and some really neat Texas slogans and wits of wisdom. One of the pictures was so very interesting to me that I thought I would share with you.

This picture was taken in Kerrville, Texas, probably in front of the Ford Dealership. Country Singer Jimmie Rodgers looks like he has just purchased this very desirable 1929, or very late 1928, Phaeton. Notice the accessories - spare tire cover, moto meter, and cowl lights. It looks to be black with white wheels, but we will probably never know that for sure. The tires are a little dirty so maybe he took a test drive prior to the picture. Now, who knows who Jimmie Rodgers is?

James Charles "Jimmie" Rodgers (September 8, 1897 - May 26, 1933) had a short but very successful career. He was known as the Singing Brakeman, Blue Yodler, and The Father of Country Music. 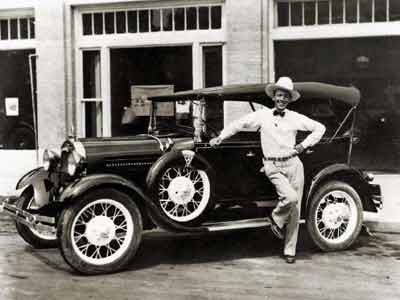 I can remember a couple of his songs but he was a little before my time. He started performing at an early age and began touring at age 13 until his father dragged him home. He began a career with the railroad, working his way up to brakeman on the New Orleans and Northeastern Railroad. In 1924 Jimmie contracted TB which essentially ended his railroad career. In 1927 he moved back to Mississippi and then the same year went to Ashville, North Catrolina, and on April 18th sang on the only radio station there with Otis Kuykendall. Later that year he had his own radio program called the Jimmie Rodgers Entertainers.

On August 4, 1927, Jimmie cut his first two records, The Soldier's Sweetheart and Sleep Baby, Sleep, with representatives of the Victor Talking Machine Company between 2:00 and 4:20 p.m. for which he received $100. In November that year, as the New Ford was being released, he cut four more records in New York City. The most famous was the Blue Yodel or T for Texas. This recording sold over a half million records. Over the next couple of years his career sky rocketed and he even made some movie shorts - kinda like MTV I guess. In 1930 he toured across the Midwest with Will Rogers as part of a Red Cross tour. Later that year he recorded Blue Yodel #9 with Louis Armstrong on trumpet and his wife, Lil Hardin Armstrong, on piano.

Because he was still having problems with his TB, he pretty much stopped touring and relocated to San Antonio and had a weekly radio program. He built a home for his family in Kerrville. He still traveled to New York to record and died there a couple of days following his last recording. He was 36 when he died.

A lot of famous people have been photographed with their New Fords. I was glad that I found this picture and learned a little more about the man. There is just something about pictures of brand new Model A Ford that just can't be duplicated by later restorations.

Better get busy on the Model A so until next month, happy touring.