Probably my favorite Model A color combination (I love the color and color names) is Chickle Drab and Copra Drab. Really, who would buy a car that was not only named one drab color but two drab colors? Ah, but the colors are not only really pretty, they mask the dust of most of the roads in North America.

Last meeting we learned a little about the colors that Henry used to paint our favorite automobile, the Model A. I have had a fascination with several of these colors over the years. Some of the colors I really like and some not so much. Three of my favorite colors are Lombard Blue, Chickle Drab and Copra Drab. I really like these colors, but even more importantly, I really like the names. Chickle Drab and Copra Drab just rolls off the tongue. Where did these names come from? Why would Henry put Chickle Drab and Copra Drab together in the first place, and what was his fascination with Lombard Blue? OK, you could ask the same question of Stone Brown, Thorne Brown, Gunmetal Blue, or Washington Blue, but the names and the colors are kind of the same, just blah.

Let's discuss the history of Lombard Blue. A quick check of the internet, the World Book Encyclopedia of the 21st century, shows absolutely no connection of the word color or Lombard. However, clicking on images gives me a big hint on why Henry or maybe more likely, Edsel, chose to paint some of the most beautiful cars known to man in the likeness of perhaps the most sexy and glamorous Hollywood Star of the era, Carol Lombard.

Her 1931 movie It Pays to Advertise was loosely based on Henry Ford's advertising campaign introducing the New Ford (surely this is true and on the internet somewhere). Please note that Carol's blouse is the famous Lombard Blue and the lower body color of Sherry's Model A Coupe. 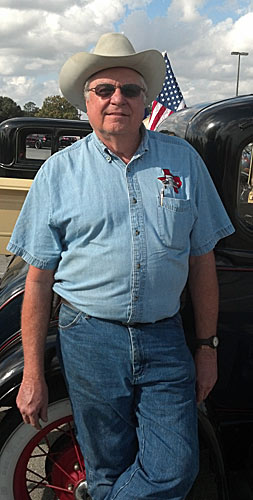 The colors are not tan, not brown, nor grey. Maybe if we knew where the names came from we could get an inkling as to the actual color. First let us look at Chickle Drab. A quick peek at the Urban Dictionary on Google says that chickle is really a pickle wrapped in cheese. Somehow, I don't think that either a green pickle or yellow cheese, even if merged, would be Chickle Drab.

I also learned that people, especially children, love to chew Frank Henry Fleer's invention: Bubble gum. In the early 1900s, the Red Indians of South America were the first to discover the chewiness of chickle, a dried sap of a jungle tree. It was colorless and tasteless. But by adding flavors and color to it, scientists made chewing gum a great hit. And, by the way, Bubble Gum was invented in 1957. So by further reasoning, it is plausible that after one chews some bubble gum, sticks it under the desk, and then a few days later pries it off with a pocket knife, one would see that the gum color would be very close to Henry's Chickle Drab paint code. Oooh, I also learned that men chuckle and women chickle. I can't wait for Valentine's Day when I can tickle my honey and watch her chickle while I chuckle.

And now for the history and logic, applied exactly the same way as the President and most of Congress applies logic, of the really unique color Copra Drab. For over a century, Copra was King. Copra (coconut) oil was traded and became the main economic output of many Pacific Island communities. Copra is the kernel of the coconut dried to a drab tan or tan and white color. I really don't think I have ever seen a dried coconut kernel unless the entire coconut is the kernel. I think I had this in botany, but that was a couple of years ago and Copra is just really not very interesting.

Have you ever noticed that you can put 5 or more Model A's painted in Chickle Drab and Copra Drab side by side and you will not find two the same color? My conclusion is that depending on the amount of time that the bubble gum is left under the desk and combined with the origin and drying time of the coconut these colors just cannot be duplicated. The only sure thing is that I really like them all.

As for the accuracy of this article, as sure as Al Gore invented the internet, I will stand behind all statements and facts in this article. Next month, I will explore the colors that Henry should have put his foot down and just told Edsel that color should not grace a Model A.